"The study of ancient writing and inscriptions; the science or art of deciphering and interpreting historical manuscripts and writing systems." "palaeography/ paleography, n." OED (March 2013)

On February 15, our work with Ms Roll 1563 continued apace as we looked forward to the upcoming Digital Editing and the Medieval Manuscript Roll workshop. We made relatively good headway at 15 lines per hour, and Amey taught us a thousand more things yet again, including how to figure out abbreviations by cross-checking Latin case endings. There was a great deal of textual blood. Jesus started bleeding at the top of the roll and didn’t stop bleeding until the end of the meeting. There was so much blood. 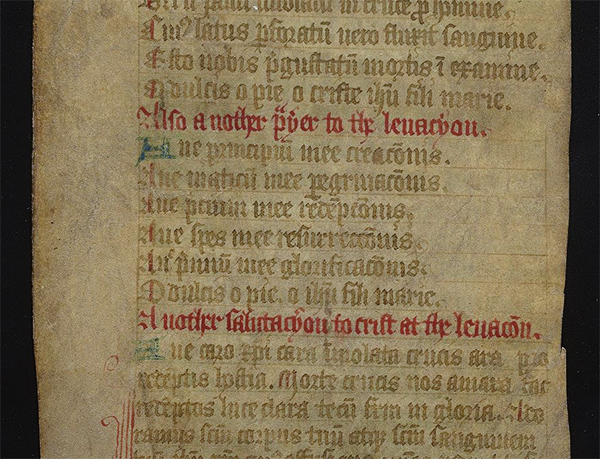 On January 25, we continued transcribing Ms Roll 1563 in preparation for the upcoming Digital Editing and the Medieval Manuscript Roll workshop. This meeting’s highlights included marveling at just how many letters in a word that scribes felt they were licensed to abbreviate, Amey Hutchins teaching us (among a thousand other things) the importance of the Levation during mass for the lay public, and the very relatable prayer “O sweet pie, o Jesus son of Mary”*

*Translation may not be strictly accurate

On January 11, Sarah Wilma Watson (English) led the first meeting of the new year by bringing in MS Roll 1563. The image above is from the top end of the recto; we collectively transcribed some of the Latin and the rubricated Middle English lines from the verso while lamenting the scribe’s stubborn preference for the biting h letter form.

MS Roll 1563 consists of two membranes that seem to have been glued together, and as a whole it measures 1372 x 130 mm. It is a roll of Christian prayers from 14C England, mostly in Latin but with some rubrics in Middle English.

It will also serve as the centerpiece for an upcoming workshop to be held at Penn, Digital Editing and the Medieval Manuscript Roll, which will adapt the program originally developed in 2017 at Yale University. The Graduate Paleography Group is excited for the event and will continue to transcribe MS Roll 1563 to prepare the text for digital editing by the date of the workshop. 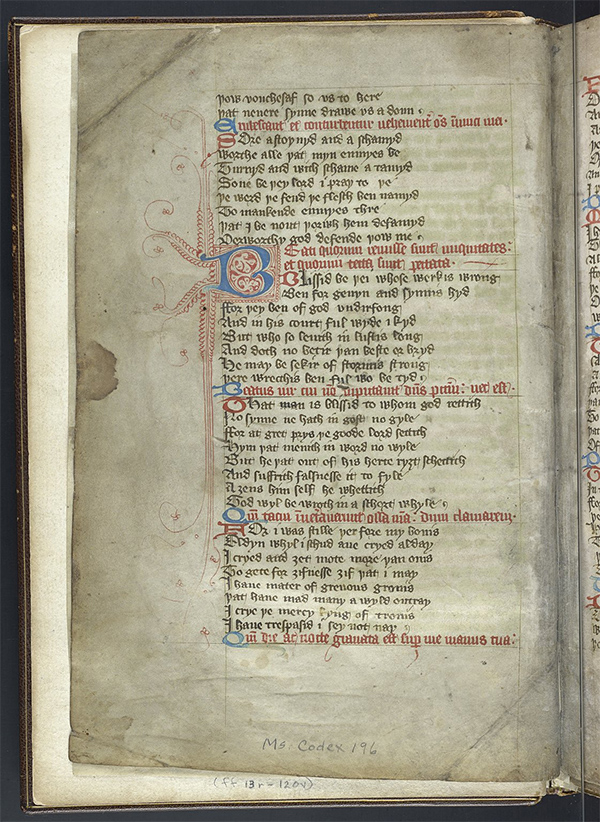 On October 26, Dot Porter (Curator, Digital Research Services, The Schoenberg Institute for Manuscript Studies at the University of Pennsylvania Libraries) showed us some of the technology available through the Vitale II Lab by applying it to MS Codex 196.

1. Could you tell us a little about the Vitale II Lab?
The lab (which we usually call Vitale II, to differentiate it from the Vitale Digital Media Lab in WIC) opened in 2013 as a general Digital Humanities lab, but since the Price Lab for Digital Humanities launched last year, and the library has a new unit for DH support, I wanted to give Vitale II new life as a focused lab for Book History & Digital Humanities (BH+DH). There’s always been work happening at the intersection of those two disciplines, but it wasn’t until this year, with the BH+DH conference at the University of Wisconsin in September, that I’d say BH+DH was really a “thing”. And what an exciting thing it is! So I’m building Vitale II as a space for experimental BH+DH work, and for education and discussion around those areas. Whitney Trettien coming in as a new faculty in English, coupled with incoming medieval graduate students who are really keen in this area, make it kind of the ideal time to make the lab happen. We have organized a series of BH+DH brownbag events, which include lectures and workshops about projects at Penn. Upcoming events are listed on our main page, and projects are listed on our Projects Page. If you have a project you’d like listed here or you’d like to present a brownbag, please contact me!

2. What were some of the imaging tools, tips, and techniques you showed us during our meeting?
During the meeting last week we used a combination of tech to give us a variety of views into the manuscript. I think we took a look at the high-res images a few times (they are online) but mostly we looked at the manuscript using the ceiling camera. The camera is a WolfVision EYE-12 camera. It displays on two 60-inch screens on the wall, so people in the room can get a good view wherever in the room they are sitting. There’s also a USB output from the camera, which means you can feed the view into a laptop and have a book-viewing video conference (we offer this as a service called Virtual Classroom Visits, but it could also be used for collaboration between Penn scholars and scholars in other places). We also used the microcamera a few times. This is like a combination between a microscope and a camera, and it’s useful for viewing things incredibly close– we used it a few times to look at one character at a time, where the strokes weren’t clear in the high-res images. I don’t think you’d want to use it all the time, but if you need a very close view it would definitely come in handy (it’s also helpful if you are interested in stratigraphy– the order of layering of ink on the page, for example in illuminated initials). We have a Plugable 250x Digital USB Microscope with Observation Stand. We also have a projector and a whiteboard. We didn’t really use it during our meeting, but if you wanted to you can project onto the whiteboard and then take notes over a projected page image– much better than writing on the page! We’re supposed to be upgrading to a whiteboard wall, but I don’t know when that’s happening.

3. What is your favorite detail about Ms. Codex 196?
There’s a lot I like about it, including the lovely blue and red penwork initials (I have a thing for penwork initials!) but probably my favorite is how it’s obviously been used. It contains a lot of marginal notes in later hands (16th & 17th century) which indicates that people weren’t only reading it then, they were actively engaging with it. It’s a reminder that books weren’t written and left on the shelf, they were read and used after, sometimes centuries after they were written. And I love that.

On October 12, Carlos Pio (Hispanic and Portuguese Studies) led our meeting by introducing us to two manuscripts, National Archive of the Torre do Tombo MS 643 (above) and Bibliothèque des Champs Libres MS 0255. Even those of us with no background in Old Portuguese or Old French enjoyed puzzling out the lines during our collective transcription.

2. How did you become interested in these manuscripts?
I started studying these manuscripts for my Master’s dissertation. I wanted to compare both versions and see their textual relationship.

3. What is your favorite detail about these manuscripts?
The Portuguese manuscript is quite unique because it has at least 5 different hands, so it is very rich and challenging in paleographical terms. The French MS is more beautiful aesthetically and the handwriting is more consistent. Also, in both manuscripts the languages are just beautiful. 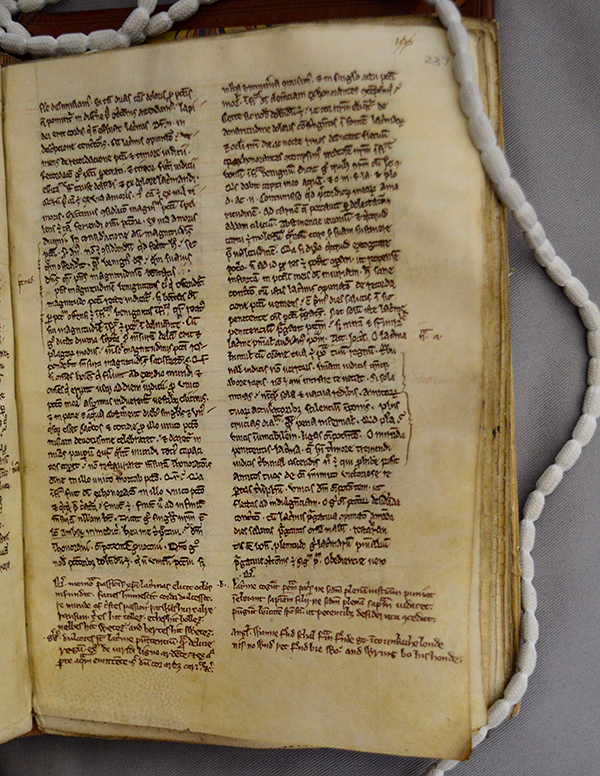 On September 28, Matt Aiello (English) led our meeting by taking us through Oxford St. John’s College MS 190; Matt told us about his work on the manuscript and its short inclusion of Middle English, and we collectively transcribed some lines in Latin.

1. Could you tell us about this manuscript?
So this manuscript is Oxford St. John’s College MS 190. It has been dated, roughly, to the thirteenth century, but based on palaeographic dating I think it’s probably the third quarter of the thirteenth century s.xiii(b1). It is a miscellany of theological work in Latin with bits in French, and the attached folio (f. 237r), is the only place that English occurs in the manuscript. The English are couplets on Christ’s passion (which are translations of the given Latin right above it), and a quatrain on a friend’s death, but written as couplets. The hand is in a shaky Textualis/Anglicana hybrid. The page dimensions are 170 x 120 mm, and based on dialectal localizing, Margaret Laing, in her Catalogue of Sources for a Linguistic Atlas of Early Middle English locates the manuscript to the Abbey of St. Peter in Westminster.

2. How did you become interested in this manuscript?
I became interested in this manuscript simply because it fell in the survey I was conducting of all thirteenth-century manuscripts at Oxford that contain English from this period. I really like this example of English, in particular, because I think the quatrain on the bottom right was a spontaneous composition that was inspired by the lines of grief on Christ’s passion copied adjacently, and I think it’s beautiful and it makes me teary-eyed and also makes me wonder about the life of this particular scribe and if he had recently lost a friend. I’ve reprinted it below:

3. What is your favorite detail about this manuscript?
It is the only surviving copy of this quatrain on a friend’s death, and the scribe has sought to make it spatially separate from the other marginalia, which to me signals that one should pay special attention to it.

On September 14, the resurrected Graduate Paleography Group met for the first time in a long time, honoring the memory of our illustrious leader Alex Devine and vowing to carry forth his legacy into the future.

Our new group organizer, Sarah Wilma Watson (English), led this meeting by guiding us through Cambridge St. John’s College MS H.5, and we collectively transcribed some lines from both the Middle English and the Latin sections of the manuscript.

1. Could you tell us about this manuscript?
Cambridge St. John’s College MS H.5 is one of three surviving copies of Stephen Scrope’s Middle English translation of Christine’s Epistre Othea (a mirror for princes). The manuscript measures about 8 x 11 inches and contains 61 parchment folios. It was made in England between 1450 and 1460 and includes a dedication to Humphrey Stafford, Duke of Buckingham.

2. How did you become interested in this manuscript?
At some point before 1487 the manuscript made its way to the Isle of Wight and into the hands of Emalyn Bramshott, a more or less unknown gentrywoman. Emalyn’s name appears on flyleaf i verso written as “Emalyn Bremschet.” A Latin prayer, naming the supplicant/ speaker as Emalena appears on flyleaf ii verso. At the back of the manuscript on the back flyleaves is a Middle English devotional text on the Five Sorrows of the Virgin Mary concluding with the phrase “Bremschet Scripsit” [see image above]. Finally, below this appears, the birth dates, places, and godparents of ten children born to William and Emelen Bremschet in a mixture of Latin and English.

3. What is your favorite detail about this manuscript?
This manuscript is exciting because the late-medieval annotator has customized this literary manuscript in the way that readers often personalize Bibles and Books of Hours.